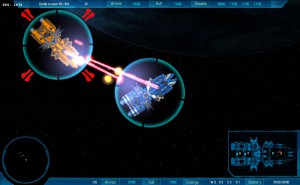 Images provided by undisclosed civilian ship from orbit of colony on 83 Leonis caused major fuss on Earth. It shows a battlecruiser of Earth Defense Forces in common blue colors, which is exchanging fire with what seems to be a ship of same class, but with orange color pattern. No further details are available to the incident. No official statement was issued. The image authenticity is questioned. However speculations emerged, that there was a rebellion on the colony and the colonists took control over some of the ships.

This entry was posted in Screenshots. Bookmark the permalink.

One Response to Unverified images from colony 83 Leonis