Here are some guidelines on how to play the game and understand the mechanics. First the bacis, then some advanced controls.

CAMERA AND HUD CONTROLS :
Esential keys to control the game are camera related :
1 and 2 zoom in and out
3 autozoom camera (on/off)

TARGETING :
FW3 is “target oriented” game. To be able to fire any weapon at all, you must have a target locked.
T next target
N nearest target

FIRE CONTROLS :
Most ships has weapons and these are divided into groups. Mostly into 2 or 3. You control each group by following keys (from group 1 to group 3) :
A S D for volleys (shot from every possible weapon in that group)
Y X C for single shots (one shot, not necessarily supported by all weapons, some are linked and only allow volley fire)
Q W E munition/settings switching (some ships has different settings or types of munition available)
More info on how weapons work follows below.

SHIELDS :
arrow keys – shield reinforcements from battery (500TJ per usage) – you can manually reinforce target shield with energy from your battery (if you have enough). In such case, 500 TJ is moved from battery to selected shield. This process can not be reversed. 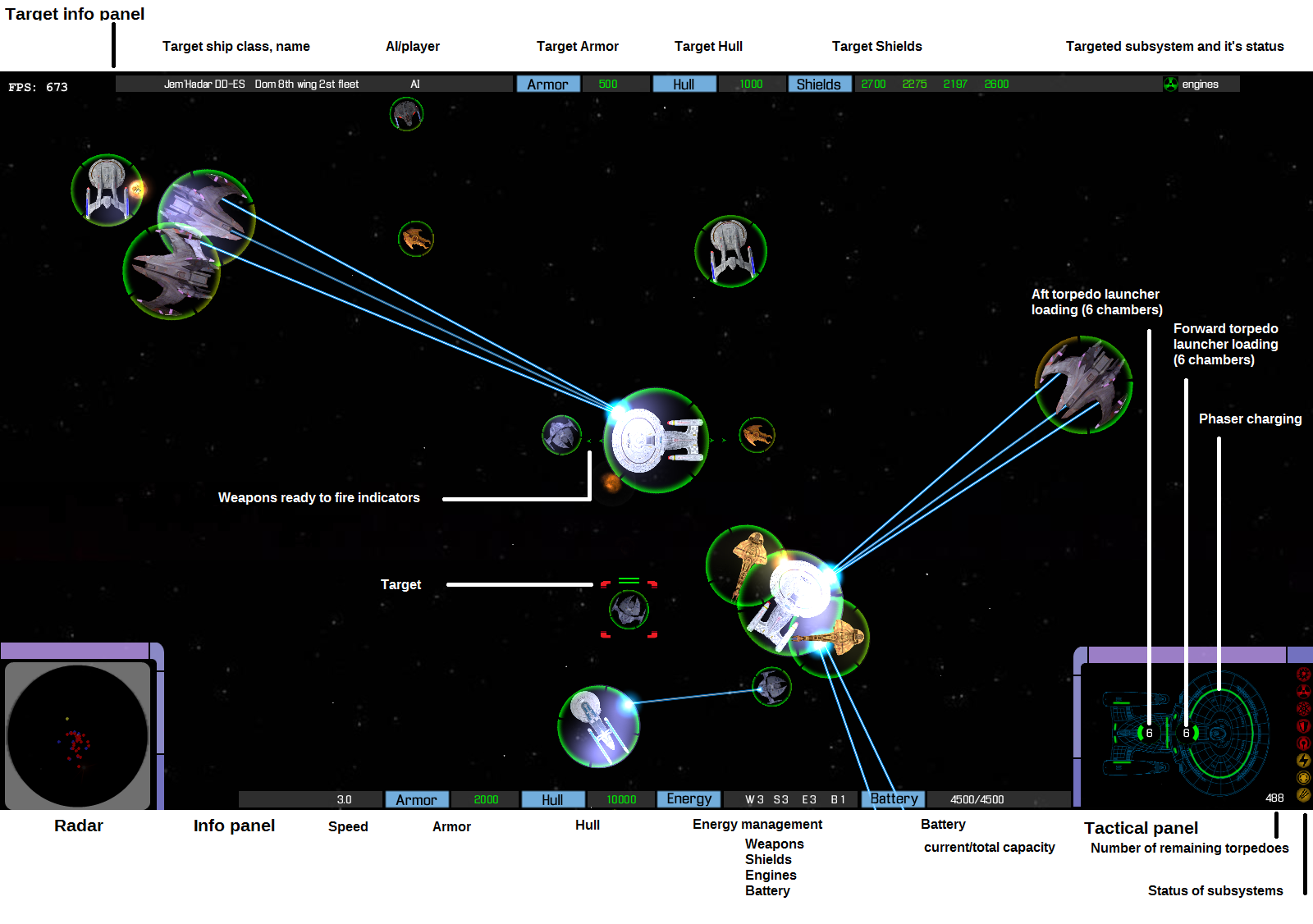 Some details available when pressing F3

Primary :
ENGINES :
Engines are quite simple system. They move your ship. Ships have limited max speed, acceleration, turning speed (these vary from ship to ship). Parameters can be affected slightly by energy allocation (see energy management). When engines are damaged, it will affect their performance.

SHIELDS :
Every ship has 4 shields segments. Each segment is independent and has some basic power (e.g. 7000 TJ). Shields protect ship from incoming fire. When they are depleted, damage will go into your armor and hull.
In addition to overall strength, shields also has “immediate capacity” which is usually 25% of the total value. If the shield takes more damage over short period of time it will collapse for few seconds, even though the total strength is higher than 0 and damage will leak through.
Shields recharge slowly overtime (depending on allocated energy). And they can be reinforced by energy from battery.

WEAPONS :
Weapons can be divided into two main types : beam and projectile. In general, each weapon has a recharge (loading) time, range, firing arc and of course power. Reloading time and range depend on weapon type. Firing arc and power depend on the exact weapon on the ship.

BEAM :
These are direct energy weapons. Typically primary weapons on ships – weapon group 1. Their common reload time is 12 seconds and range around 6km. Firing arc vary from 45° to 270° or even 360°. Usual power varies between 300 TJ and 1000 TJ. Ships usually have 1-4 beam weapons.

PROJECTILE :
Projectile weapons usually do have “chambers”. Meaning that the are loading more than one shot at the same time. So a ship with a torpedo launcher with 4 chambers can load 4 torpedoes simultaneously and then fire them within a short time.
These can be of two subtypes :
Pulse weapons – energy powered, non-guided weapons. Sometimes used as supplement or instead of other primary weapons on some ships – in weapon group 2. Their reloading tend to be a bit lower and range around 5km. Their firing arcs are quite narrow. These weapons usually have 4 chambers and are oriented forward.
Torpedoes – secondary guided weapons – in weapon group 3. They activelly track targets. Reloading time and warhead depends on exact type of torpedo. Basic photon torpedoes have reload time of 20 seconds and warhead of 270 TJ. Heavier torpedo types have reload time of 40 seconds and warhead of 540 TJ. Range is around 9km, Most ships have torpedo launchers oriented forward and backward. Usually with more than 1 chambers. Torpedoes are not energy powered (reloading even without assigned energy) but every ships carry only limited amount.

ARMOR :
Armor is ships second layer of protection when damages goes through shields. When ship is hit, the damage is first mitigated by the armor. It can be also fully absorbed by the armor, if it is strong enough. With more damage, the armor is reduced and as the armor is weaker, the more damage goes through to the main hull.
The strength of armor is expressed in TJ equivalent – so it is easily compared with weapon damage or shield capacity.

HULL :
Hull represents the state of the ship. As it gets damaged, more and more subsystems stop working. At 30% of integrity the ship is no longer operational, but it can still be repaired by it’s crew. At 10% of integrity the ship is derelict and no longer repairable. When hull drops below 0% it is destroyed completely.
The strength of hull is also expressed in TJ equivalent – so it is easily compared with weapon damage or shield capacity.

Advanced controls :
FLIGHT CONTROLS :
You can also use 7 and 9 – for high energy turns, but these consum energy from your battery (more on that later)
Most ships also have FTL engines (warp). You can enter/exit warp by pressing 0. You move faster, but your turning is very limited.

CAMERA AND HUD CONTROLS :
4 and 5 toggle symbols and colors (when zoomed out max to tactical view)
6 toggle target info modes (more info is displayed about target)
7 ships overview
8 advanced hud (some additional info – like marker on ships targeting you etc.)

TRACTOR BEAM :
H – you can use tractor beam to hold your target. Your position and distance will be interlocked, and you will move together. The vector of your movement is a result of you and your target mass and engines power. So tractoring larger ships is generally contraproductive. Tractoring smaller more agile ships can be important to be able to hit them. Tractor beam consumes energy from battery and has limited range (about 2.4km)
Tractor beam has some “coherence” which can be disrupted by damage. So tractor beam lock can be repelled by fire.

CLOAKING
Numpad *
Klingon and Romulan ships are equipped with cloaking device. When engaged, it hides the ship from enemy sensors and the ship is invisible and not targetable. There is currently no way how to detect cloaked ship. However – the cloaking provides only some amount of “cover” so the ship must go to “silent mode” to be effectivelly cloaked. That means lowering shields and not firing any weapons. Firing weapons will automatically decloak you. Shields are lowered and raised automatically. Also, you are vulnerable against blind fire or shots targeted to other ships. You should evade those. Because without shields, they can cause critical damage fast and also any impact will reveal you for a brief moment, which could be enough for enemy ship to lock on your location and fire – revealing you again and with luck – keeping you revealed. Also your engines exhausts can be detected, if you allocate more energy to engines than 30% – your cloaking device might not be able to compensate.
When active, cloaking device also consumes some amount of additional power from battery.
You current status “cloaked/revealed” is visible on bottom left InfoPanel (next to radar)

ENERGY MANAGEMENT :
You can relocate energy from your main reactor among your main systems : weapons, shields and engines. Nonassigned power recharges battery. Ship systems works optimal with assigned 30% of energy. Adding more energy can give better outcome, but the advantage is non-linear so routing 60% of energy to weapons will not give you double reloading time. In fact the efficiency of system per 10% of energy assigned is following : 0% 33% 66% 100% 125% 145% 160% 170% 175% 178% 180%.
Energy in weapons affects recharging time of energy based weapons (so torpedoes are not affected)
Energy in shields affects recharging speed and also immediate capacity – this is quite important, because removing energy from your shields will leave you susceptible to damage.
Energy in engines affects your speed.
weapons – Ins Del
shields – Home End
engines – PgUp PgDn

According to their role :
EX – Explorer – Intended for exploration/scouting. Have better sensors and engines and decent weaponry.
ES – Escort – Designed for protection of weaker ships. They are surprisingly heavy armed to eliminate threats quickly. But they tend to have weaker shields, because it is not expected that they will be a object of an attack. They also have powerful engines. To keep with allies or to pursue enemies. But they have weaker sensors.
CC – Command cruiser – Versatile ships well equipped for any task. Good engines, sensors. Well armed and shielded. And equipped also for scientific or diplomatic missions.
WS – Warship – Ships designated primarily for battle. They have powerful weapons and shields to be able to hit not be afraid of retaliation. Their engines and sensors are less effective though.
FS – Fire support – Ships carrying heavy weapons to support allied ships but keeping distance. Therefor they have good sensors, but weaker engines and shields. So they should not be in the middle of the fight.
SC – Science – Not well equipped for battle and usually slow engines. But they have state-of-the-art sensor equipment.