Final war 3 is a sequel in a row of topdown starship combat games (see Evolution). 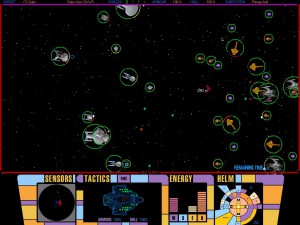 Final war 2 was quite popular worldwide and one day I decided that I would like to remake it so it is even better and runnable on modern day computers. Also I wanted to add plenty of cool features I had in mind. So I started working on FW3.

My goal was to reuse all what was working in FW2 and build on top of it. I’d like FW3 to be to FW2 what Starcraft 2 is to Starcraft 1. This time the major point was multiplayer. The option to play against friends was something everyone wanted in FW2.

Although the previous games were free, I would like to put some reasonable price on this one. I would like to see, if I am able to design and implement a game, that can earn some money. So maybe I could make games for living. It was always kind of my dream, which I don’t want to let go easily.
But of course I can’t sell game of Star Trek franchise. Because I don’t have a license. Therefor FW3 in it’s basic form will be game with it’s own universe, custom ships and other stuff. But it will be highly modable.

I’ve been working on this for a few years now. Alone. I have already great portion of the game done. I hope I can show you some stuff very soon. But as the time goes by, I have to admit, that together with my everyday work, I was aiming to high. And now I see I will have to cut a lot of features. Otherwise I will never be able to finish this. I want to start some alpha phase and pre-sales as soon as possible. I can always add more things in beta phase and later (Minecraft style).